Skip to content
Flowton > St Mary’s Church > About the Church

See the drop down menus for further contact information and details of services. Our Church is always open for visiting and has information boards in many languages that can guide you around our small but beautiful village Church.

Flowton is a small parish about 6 miles from Ipswich. Its name appears to derive from ‘Flocctun’, meaning a flock (or sheep) farm. It is a small village and its population lives in scattered farms and houses, and in a few modern homes near the Church which is situated at the north end of the parish.

The situation of this Church is one of its attractive features, overlooking pretty and undulating countryside. It stands on quite high ground. The churchyard is trim and attractive and is entered through a simple wooden lych-gate with wooden welcome signs made by a local craftsman. The lower extension to the churchyard is an addition made through the generosity of the Watkins family. The south side of the churchyard has been allowed to grow naturally, in contrast to the more formal northern aspect.

St Mary’s has been a centre of Christian worship for over 700 years and is mentioned in a number of references on historical church buildings. 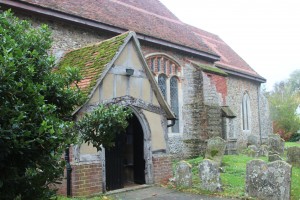 The Church as a social building

The Church has been the centre of village life for many years as there are no other community buildings for many miles. As a result the parish is able to generate considerable goodwill and financial support from the wider population. In order to perform our mission, the congregation at Flowton has developed a programme of community-based activity, entertainment and support that has, and continues to, attract wide support from the village and beyond.

The vestry provides a parish room in which to hold meetings of the PCC together with others of a civic, educational or leisure nature. It also acts as our polling station. The body of the Church is regularly used for concerts, quiz nights, fundraising events, children’s workshops (based on the Ecclesiastical year) and a monthly village coffee morning. Use of the Church in this manner allows it to be a venue for village events that would normally be held in the open air, but are subject to the vagaries of the British weather!

It is an unusually complete example of an early 13th Century medieval church, consisting of nave, chance, south porch and west tower. It is constructed mainly of flint rubble walling with freestone dressings and massive buttressing. On both of the nave buttresses east of the porch are medieval mass-dials carved into the stonework which were used to fix the times of the service before the days of clocks. 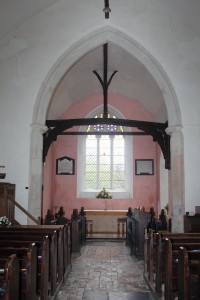 The church is entered by means of an early 14th century south doorway and porch. The south face of the porch has a timber frame, filled with cream-coloured rendering. Some of the timbers are original, particularly in the wooden entrance arch and are likely to be in excess of 600 years old.

Both nave and chancel have good and complete early 13th century roofs; long octagonal crownposts with moulded capitals and square-sectioned 4-way braces (probably from the 14th century), the tie beams, arch-braces, wall posts and cornices are all moulded.

The font is 13th century with a splayed bowl, each face with shallow arcading, and a C17 oak cover with ramped scrolls. The pulpit was installed in 1958 and the communion rail is in the style of the 17th century. 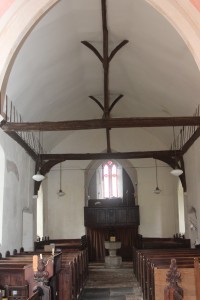 The tower contains a quatrefoil-ringing chamber, with single bell, and 18th century gallery. From the gallery there rises as rare C14/C15 timber stair with triangular block treads. This is one of only three medieval staircases in the diocese as was sympathetically adapted in 2013 to retain access to the tower. The single bell was cast by Thomas Mears of London in 1823 and weighs 6 ¾ cwt. An unusual feature of the tower is that its moulded 14th century doorway is on the south rather than the west side. When seen from the outside, the west face is rather grand because large 14th century cinquefoil-headed niches preserve the original pedestals upon which their former states stood. The flint-walled tower was once a stage higher than it currently stands. It has an 18th century brick parapet and tiled pyramid cap.

The north doorway of the nave has a very simple arch and is thought to be late 13th century. The vestry was added to the north of the chancel during the late 18th or early 19th century. Its large eastern sash window gives it a very domestic appearance and it may well be that this vestry served as a schoolroom for Flowton children. 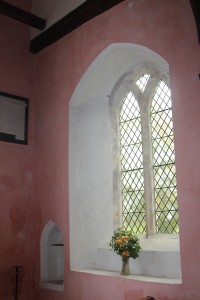 Several of the windows have the simple ‘Y’ tracery of the early Decorated period of architecture, in use around 1300. The three-light east window shows a later development of the Decorated style (c. 1330) and has beautiful reticulated tracery. The hood-mould which frames its arch rests upon original corbels in the shape of animal heads. On the south side of the sanctuary is a great rarity: the piscine that formerly served the altar. It retains its original credence shelf.

Other 14th century features include a shafted chancel arch and a fragment of a red abstract painting on the south nave wall to the east of the main door which was discovered in 1973. In the 15th century, a large 3-light window and rood loft stair case were inserted using red brick although it has long since been blocked off, the staircase being in the turret behind it. At the time of the erection of the turret, it is likely that the one window in the church in the Perpendicular style of architecture was installed.

This site uses Akismet to reduce spam. Learn how your comment data is processed.